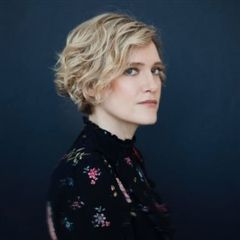 Branksome readers had a special treat when award-winning Canadian novelist Heather O’Neill answered their questions about the writing life during her presentation in the PAC. O’Neill’s first novel, Lullabies for Little Criminals won the 2007 Canada Reads and the Hugh MacLennan Prize for Fiction.
Lullabies is a gritty coming-of-age novel lovingly set in run-down Montreal. She is the winner of two National Magazine Awards, while her second novel and a collection of poetry were both shortlisted for the Scotiabank Giller Prize.

O’Neill became a writer when she got her first journal as a gift. “I liked the idea of writing down everything that happened to me that day and turning my life into fiction,” she told the students. No sooner had she filled a journal, however, then her father, “who was involved in criminal activity,” would throw it out as he knew it would contain evidence that could be used against him in court.

Fortunately, a high school teacher admired a short story she’d written about a cockroach who tried to pass himself off as a cricket and told her she had a talent for writing, encouraging her to continue.

Ms O’Neill visited Branksome as the 2017 Rebecca CHISHOLM Clarkes’66 Speaker. The speaker series, which brings a well-known writer to Branksome Hall every year, was established in 1986 as a tribute to Rebecca by her classmates, friends and family.

“It is a wonderful gift for students to hear authors speak,” says organizer, faculty member Jillian Strimas. “The Rebecca CHISHOLM Clarkes’66 Speaker Series humanizes the writing process and allows young people the opportunity to hear directly from some of the most esteemed cultural producers in the country.”

Aspiring writers in the audience would have felt ready to tackle the page with all of the actionable wisdom Ms O’Neill shared. She writes from 9:00 a.m. – 5 p.m., but advises new writers to start with just one hour and build from there. She recommends developing an aesthetic of your own, exploring all the art, music and literature that inspires you. For Heather, that included stories of her father’s gangster life in depression-era Montreal, stories which inspired her latest novel, The Lonely Hearts Hotel.

She advised young writers to take any opportunity to share their work, “because every time you do something, you get braver.” Not only that, but people’s reactions can be surprisingly encouraging. Ms O'Neill develops characters by starting with an idea and writing a lot of notes, “like small sketches for a larger painting.” Writer’s block? “Push your way through. Inspiration is not always in tune with creation.”

Most importantly, expect and embrace rejection. Lullabies for Little Criminals was rejected many times before being published. “Don’t reject yourself. Let someone else reject you!” she said. “You will get rejected if you are pushing boundaries and doing something new. Rejection feels bad, but just treat it as the flu. You realize it’s part of the human experience and there’s always something better on the other side.”
Back