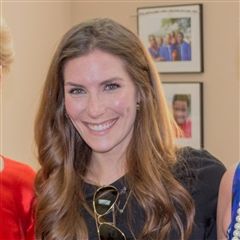 Branksome alumna Sarah LEVY'04 delivered a heartfelt speech about her years at Branksome Hall and her successful performing arts career after graduation. Ms Levy is currently starring as Twyla Sands on the award-winning CBC sitcom Schitt's Creek, alongside her father, Eugene Levy, and Catherine O'Hara.
Ms Levy said that she owed much of her desire to pursue a career in the performing arts to her time studying under Director of Performing Arts Ms Judith Friend. Ms Friend inspired Sarah, who played Mrs. Webb in the Branksome production of Our Town, to follow her dramatic arts dreams.

"Branksome helped develop me as a writer, dancer and artist," she told the audience, which consisted of Senior and Middle School students, and invited guests.

She emphasized that it hasn't always been an easy road, and urged students to not take a career in the arts lightly. "You have to commit whole heartedly. I mean, really commit. Don't be afraid of committing because you might fail."

While Ms Levy reminisced about her memories at Branksome Hall, she also shared an inspiring message with students—one that encouraged them to find their true passion. "Do what you love. If you really love it, go for it."

She concluded the afternoon by directing an important message to all aspiring creators in the audience. "We have a responsibility to infuse the world with creativity and imagination because there can never be enough art."

Ms Levy is currently filming the third season of Schitt's Creek.
Back