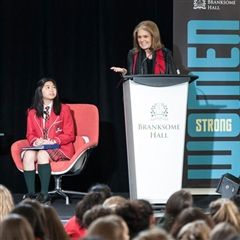 “All over the world, in my experience, young people, no matter how young, say things of great wisdom. They say ‘it’s not fair’ and ‘you’re not the boss of me’ — that is the basis of all social justice movements.”
October 2017 - Gloria Steinem, a writer, lecturer, political activist and feminist organizer, spoke to more than 600 students at Branksome Hall and later to a sold-out audience at Convocation Hall.

Ms Steinem travels throughout the United States and other countries as an organizer and lecturer and is a frequent media spokeswoman on issues of equality. She is particularly interested in the shared origins of sex and race caste systems, gender roles and child abuse as roots of violence, non-violent conflict resolution, the cultures of indigenous peoples, and organizing across boundaries for peace and justice. Her 2015 book, My Life on the Road, is her first in over 20 years. She lives in New York City. For more about Gloria Steinem, please visit: http://www.gloriasteinem.com/
Back