The World is
Coming to Canada

The world’s best student debaters and public speakers are coming to Canada for the first time in history.

Branksome Hall is proud to host the 31st World Individual Debating and Public Speaking Championships in Toronto, Ontario, Canada from April 11 to 17, 2019.

More than 125 high school debaters and public speakers from around the globe will compete in four challenging categories: debating, interpretive reading and impromptu speaking, as well as either after-dinner speaking or persuasive speaking.

Competitors will rank among the world’s very best student orators — having already proven themselves at local, regional, national and international tournaments. They’ll arrive in Toronto seeking the ultimate prize: the title of world champion.

The World Individual Debating and Public Speaking Championship is an annual international English language debating and public speaking tournament for individual high school-level students from around the globe.

The Worlds is an innovative multi-day tournament which requires students to interact and collaborate with like-minded peers from diverse cultural backgrounds and countries. Each participant must compete in four different events:  Debate, Impromptu Speaking and Interpretive Reading, as well as either Persuasive or After Dinner Speaking.

The fourth Poet Laureate of Toronto (2012-15) and the seventh Parliamentary/Canadian Poet Laureate (2016-17), George Elliott Clarke was born in Windsor, Nova Scotia, in 1960. Educated at the University of Waterloo, Dalhousie University, and Queen’s University, Clarke is also a pioneering scholar of African-Canadian literature. A professor of English at the University of Toronto, Clarke has taught at Duke University, McGill University, the University of British Columbia and Harvard University. He holds eight honorary doctorates, plus appointments to the Order of Nova Scotia and the Order of Canada at the rank of Officer. He is also a Fellow of the Royal Canadian Geographical Society. His recognitions include the Pierre Elliott Trudeau Fellows Prize, the Governor General’s Award for Poetry, the National Magazine Gold Award for Poetry, the Premiul Poesis (Romania), the Dartmouth Book Award for Fiction, the Eric Hoffer Book Award for Poetry (US) and the Dr. Martin Luther King Jr. Achievement Award. His books are available in Chinese, Italian, and Romanian. 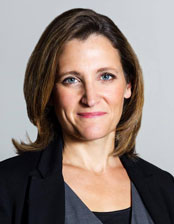 Chrystia Freeland is Canada’s Minister of Foreign Affairs and the Member of Parliament for University-Rosedale. An esteemed journalist and author, Chrystia was born in Peace River, Alberta. She received her undergraduate degree in Russian history and literature from Harvard University and obtained a Master of Studies degree in Slavonic Studies from St. Antony’s College, the University of Oxford as a Rhodes Scholar. After getting her start as a Ukraine-based stringer for the Financial Times, The Washington Post, and The Economist, Chrystia took on a number of roles at the Financial Times, including UK News Editor, Moscow Bureau Chief, Eastern Europe Correspondent, Editor of FT Weekend Magazine, and Editor of FT.com. She served as Deputy Editor of The Globe and Mail between 1999 and 2001 before becoming Deputy Editor and then US Managing Editor of the Financial Times. In 2010, Chrystia joined Canadian-owned Thomson Reuters. She was a Managing Director of the company and Editor of Consumer News when she decided to return home and enter politics.

Chrystia has written two books: Sale of the Century: The Inside Story of the Second Russian Revolution (2000) and Plutocrats: The Rise of the New Global Super-Rich and the Fall of Everyone Else (2012). Plutocrats is a New York Times best-seller and won the Lionel Gelber Prize and National Business Book Award. In 2013, Chrystia gave a TED Talk about global income inequality, based on the themes of Plutocrats. It has been viewed almost two million times.

In 2013, Chrystia was first elected as the Member of Parliament for Toronto Centre in a by-election and then re-elected in 2015 as the Member of Parliament for University–Rosedale. Between November 2015 and January 2017, she served as Canada’s Minister of International Trade. She is married and the proud mother of three children, raising them in Toronto.

Click here to be taken to our online registration system.

studentsCoaches and Chaperones
Registration Fee: US$1,900

The 31st World Individual Debating and Public Speaking Championships will take place from April 11 to 17, 2019 on and around Branksome Hall’s downtown Toronto campus.

Please note that the following is a preliminary schedule provided to assist participating competitors, schools and national delegations with their preparations and is subject to change at the organizers’ discretion.

*Meal/Activity not included in registration fee

Patrons and Special Thanks